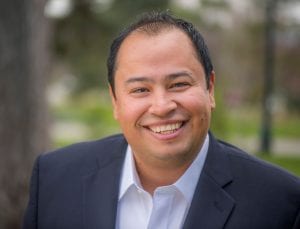 Alex Sánchez is the Executive Director of Valley Settlement. He joined the organization in May 2019.

Alex began his professional career with New York-based company Pfizer, building strategic partnerships for the pharmaceutical-giant from his home base in Colorado.

After he left corporate America, Alex spent eight years as a senior administrator in large urban school districts in Colorado, Texas and Florida, where he led multilingual teams working directly with immigrant and refugee families. In Denver Public Schools, Alex was the founding director of the first-of-its-kind multicultural office, charged with introducing linguistically and culturally effective programming for Latino and Vietnamese families as well as refugees from several different countries. In Austin and Palm Beach, Alex led the school districts’ first comprehensive family and community engagement departments, introducing year-long leadership programs for parents and customized family programming for Latinos, African-Americans, Haitians and other communities.

Before joining Valley Settlement, Alex managed his own public affairs and political consulting firm, splitting his time between Denver and Barcelona, Spain.

He is a proud son of Mexican immigrants who grew up in El Jebel and attended Basalt schools as an English language learner. Alex is the first in his family to graduate from high school and receive college degrees from both Colorado Mountain College and Colorado State University.

Alex has served on several non-profit boards for organizations promoting social justice, immigrant rights and education opportunities. He has also been appointed to government boards and commissions including the Colorado Medical Board and Denver’s Latino and GLBT commissions. Alex is a former senior fellow of the Mexican and American Solidarity Foundation and served a three-year term on the advisory council of the Instituto de los Mexicanos en el Exterior, an autonomous agency of the federal government of Mexico.

You can reach Alex at alex@valleysettlement.org.

Roaring Fork School District
The school district in which we serve

Stay informed with news and updates straight to your inbox.

Do NOT follow this link or you will be banned from the site!
COVID-19 - Find resources in the Roaring Fork Valley / Recursos en el ValleGO ->
+